The sun came out like a newborn baby, I was that elated to see it. The night had been pregnant with a new day. The sky was transformed, growing pale blue as a bubble, inside which the wind increased as the cold air warmed. Atop the deepwater swell running south, the surface of the ocean grew choppy, white caps breaking. The sun rose yellow, shimmering; the ocean appeared to boil on the horizon. The wind and wave action increased with the rising temperature. Flying fish swarmed around the boat, airborne between the white caps. A school of black dolphin, chased the flying fish.

I had never seen so many dolphins. They were the little ones with curled dorsal fins, black dolphins, hundreds of them, chasing flying fish for breakfast, a race for survival.

I shouted the word, “Beauty!” I screamed it again. Black dolphin leaped at the sound, mammals like me; I was less alone on the ocean. Lack of sleep heightened everything. Strong emotions came to the surface. “Beauty!” I heard myself laughing, the tears coming into my eyes.

The dolphins disappeared, and I was suddenly so tired my eyes burned. All the muscles in my abdomen and lower back ached from compensating for the constant motion. I did not realize how dehydrated I was allowing myself to become. The mild seasickness had settled into the pit of my stomach as a knot about the size of a child’s fist. I was not nauseated or dizzy unless I went below, where, if I stayed on my feet for long, out of sight of the solid, unmoving horizon, my eyes began to swim. What was left of the last full meal I had eaten two days ago, the knot in my stomach, began to creep up my esophagus as sour fluid.

I tried taking a nap. Maybe for fifteen minutes, I was out cold. Waking, it seemed as though I had been gone for much longer, and I was much rested.

I made hot chocolate and dipped Saltines in it, watching the boat sail. The bigger the wind, the more she liked it, a blue water cruiser, built for distance rather than speed. You wanted a lot of wind to exercise this boat.

Had it not been for the wind, I might never have known I could weather such chaotic conditions. I was better built than I imagined.

The second night out, I got no sleep at all. My stomach felt like I’d swallowed my fist. I hadn’t eaten anything but saltine crackers, hadn’t drunk enough water in two days. When I laid down, my leg muscles twisted into knots.

The way it hurt, put me in a kind of trance, where after a while my legs felt separated from my body. I stopped fighting the pain and simply observed it—passively enduring the cramps and then letting them go. Then I feared the next attack of cramps—as I would come to fear the unhappiness of Betsy—and the muscles twisted.

It went on like that all night in the Gulf of Mexico. 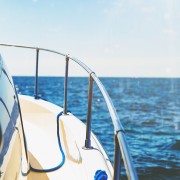 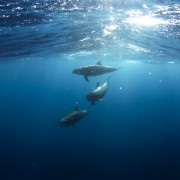 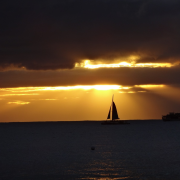 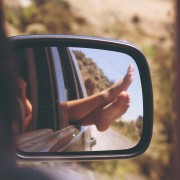 Tweets by @BoBryanWrites
Listening Inside